A Visit from the EAA Chapter:

Last week saw a visit from the local EAA chapter, after the morning's meeting.  I did a little show-and-tell, explaining to some of the members what was going on, what various contraptions were used for what.  To my benefit, some of the other builders in the club took a look over my work thus far.

They pointed out that I should prime the final-drilled hinge bracket attach holes as the brackets themselves are steel, and will corrode if not treated.  Not a big deal, I'm going to be priming the skeleton of the rudder next week, so I'll drill out the brackets and touch them up then. 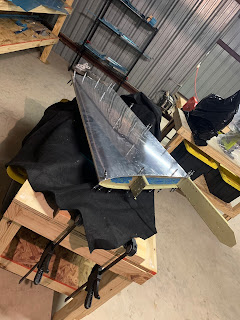 With the newfound confidence of (mostly) finishing my first actual airplane part, I finally got along to starting the rudder.  Having read ahead in the instructions, it looks like the riveted trailing edge will present the biggest hurdle.  Lucky me, I've practiced once on the preview kit, and did alright.  This one has a pre-drilled wedge, which should reduce the variation on this build.

The majority of the build process so far has involved fabricating a bunch of parts from the joined-together stock.  To get it done, added to my stash of tools to cut, grind, sand, and polish all these little bits and pieces. 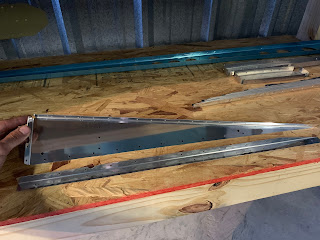 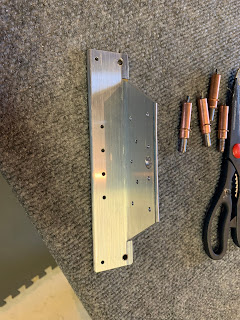 Those little bits and pieces come together to make a bigger bit and piece. 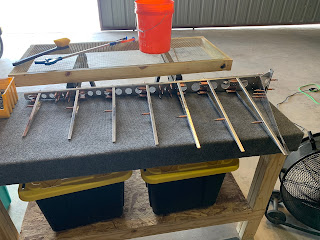 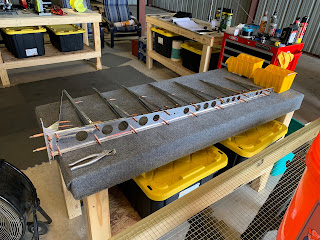 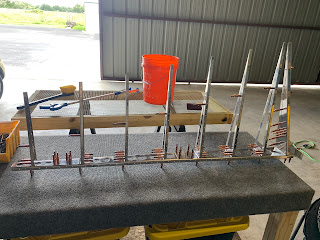 Then a bigger piece still. 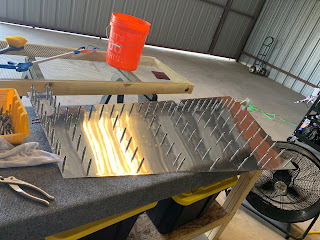 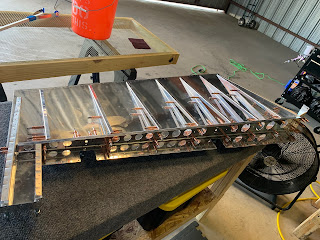 Thus the Elephant is eaten, one bite at a time.

Eventually resulting in a drilled TE, drilled perpendicular to the chord, as per plans. 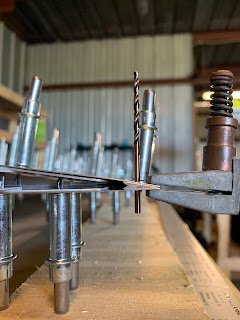 Texas in the Summer

Yah, it got toasty last week.  Luckily, I picked up a few palettes of water beforehand to keep myself cool. 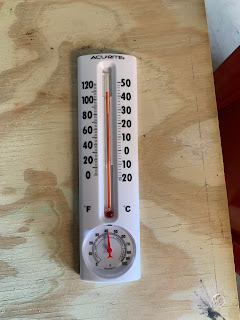 I'm going to have to seriously consider picking up a swamp cooler for the hangar.

Prime-a-palooza After what I thought was enough deburring (more on that in a bit), I started priming the shiny bits. The rudder has significantly more components than the vertical stabilizer, which resulted in a number of rounds of priming. Finally, I was able to start dimpling the skins, which was oddly satisfying Anticipating some flush riveting in the near future, I finally sanded the Avery swivel set so the AN426 heads don't sit proud to the skins. First Big(ish?) Mistake So Flight Chops has a new video out about his build!  He seems like a good guy, but honestly I feel like his videos make building seem more daunting than other channels set up specifically for building.  This is primarily because Steve seems so overwhelmed by everything, and he appears to be leaning pretty heavily on experts.  This is compared to Jason Ellis' channel , where he shares not only the build process, but the process of learning, making mistakes, and resolving issue
Read more