Why is the little wheel on the wrong end?

So, I apparently can't get enough of the vertical stabilizer.  After fretting about the stiffener, I finally drilled out all 62 rivets common to the spar.  On the bright side, I've gotten really good at drilling out rivets.  It helps that the rivets were all 4/32nds diameter. 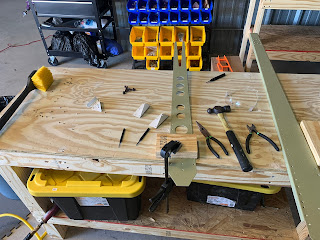 Having drilled out the stiffener, I went to town on it, smoothing out the edges with the bench grinder and die grinder with attached scotchbrite wheel.  Of course, sanding these edges took off some of the primer, and this had to be touched up.  I picked up an airbrush, which was actually pretty hard to use.  At some point, I'll probably have to use it again, but I definitely prefer the HVLP gun. 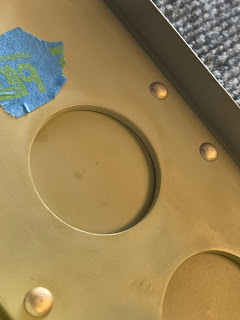 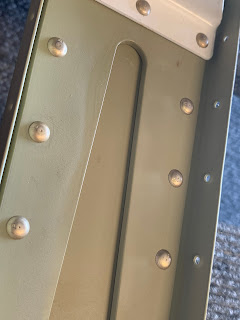 After getting the spar re-assembled, I contacted an EAA Tech Councilor, Mr. William Bennett to stop by for an initial inspection.  After inspecting the V-stab and the work done thus far on the rudder, he signed me off with the initial inspection form!  Thank you again for your help and advice Mr. Bennett!

After the inspection, I finally closed up the Vertical Stabilizer.  Having finished the swivel set earlier, I took to flush-riveting the skins to the skeleton and spar: first selfie! 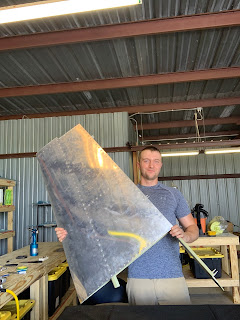 Closing Up the Rudder

With the added confidence of the completed inspection, and with a few extra hours from a missed taildragger lesson due to low ceilings, I took the opportunity to work on the rudder.  After all the work getting the parts final-drilled and primed it was very satisfying to start putting parts together. 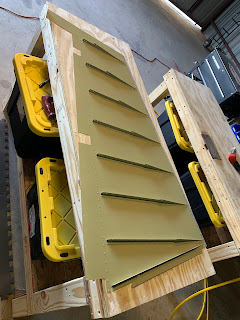 After getting the stiffeners attached, I started rolling the skins on, which made for quite a sight. 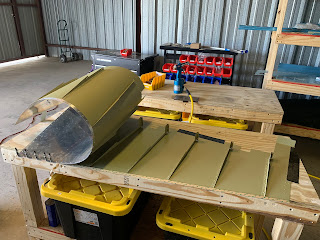 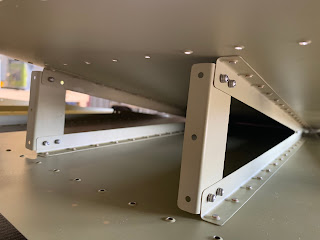 I had tried out one I picked from Harbor Freight, but predictably it was absolutely garbage.  I picked up a pop rivet gun from ACS which has been very useful.  The result can be seen above on the webs of the skin.

I then attached the newly riveted skeleton, not pictured, riveted the R-00912 rib, and attached the counterbalance. 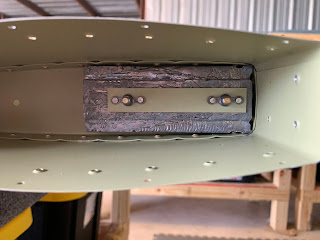 After all that fun, I attached the R-00902 spar to the skins, and finally the R-00903 tip rib.  All that's left now is the infamous rudder trailing edge.  It won't be perfectly straight, but it should be well within Van's spec. 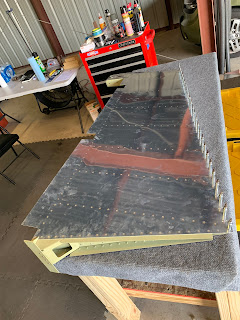 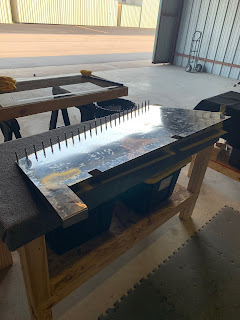 My flying club is working to sell the Alarus, which is the only aircraft I'm currently checked out in.  So to broaden my horizons, and add a taildragger endorsement, I've started taking lessons in the club Aeronca Champ.  To prep, I took the opportunity to do some reading.  I don't quite have a handle on it yet, but taildraggers are a good time! 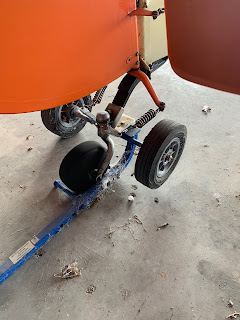 Prime-a-palooza After what I thought was enough deburring (more on that in a bit), I started priming the shiny bits. The rudder has significantly more components than the vertical stabilizer, which resulted in a number of rounds of priming. Finally, I was able to start dimpling the skins, which was oddly satisfying Anticipating some flush riveting in the near future, I finally sanded the Avery swivel set so the AN426 heads don't sit proud to the skins. First Big(ish?) Mistake So Flight Chops has a new video out about his build!  He seems like a good guy, but honestly I feel like his videos make building seem more daunting than other channels set up specifically for building.  This is primarily because Steve seems so overwhelmed by everything, and he appears to be leaning pretty heavily on experts.  This is compared to Jason Ellis' channel , where he shares not only the build process, but the process of learning, making mistakes, and resolving issue
Read more